Bracia / Brothers – A Masterpiece of Film

I resolved to see some of the Film Festival this year and booked a ticket for a Polish documentary called Bracia/Brothers by Wojciech Staron and boy am I glad I did. It may be the best film I ever saw. I’m not sure yet. But it’s way up there – that’s for sure.

Two brothers, Mieczyslaw and Alfons Kułakowski have returned to Poland after an exile of 80 years (yes), in Siberia and Kazakhstan, to resume their lives as best they can. The film, shot over 8 years, tells of their lives, as they live them, now.

Now is a very important word in this film. Part of its genius is that it is so very present and how much it leaves out.

It’s not a documentary as such, at all. It’s a story. It tells the story of two old men, living with each other, and all that entails. Alfons is a painter, a sprightly man in his mid 80s, and he looks after his older brother Mieczyslaw, who is fading a little. Mieczyslaw was a film-maker, cartographer and engineer – more down-to-earth than his arty, confident young brother.

Bracia was evocative, for me, of the great Italian film Le Quattro Volte, which also tells a story of renewal, and also Of Gods and Men, which is a delicate and moving story of faith and love among men.

The Bracia story is told in long, intimate scenes, as the brothers interact with each other in mostly everyday situations. The camera is never addressed, and apart from the barest of introductions there is no exegesis. Now they walk up a hill in sunlight, supporting each other. Mieczyslaw slips on ice. Alfons says, ‘come on.’ Now they discuss a view. Looking over a frozen lake, Alfons says: “We are together here.”

And that sums it up for the viewer too: We are here. Now.

Mieczyslaw says that when you are young you can climb any mountain, when you are old you sit down. Alfons gives him some neck exercises to do. Mieczyslaw’s warm smile at him is one big “as if…” Alfons is a bit of a rogue.

What moved me most about the one hour film was its humanity. The intimacy I experienced there in the Gate Cinema was extraordinary. It’s a film about love, acceptance, ageing. It’s about heartbreak and renewal and starting again.

It was such a privilege to have experienced it, such an affirmation, and one I will treasure.

Mieczyslaw uses a pair of pincers to put on a sock. It takes a long time, he has to work hard. The camera is close, we think: ‘Jesus, will you give him a hand’ but no, the film-maker is saying: ‘this is life, this is what it’s about, look at it, be there, take it in.’

Similarly in another scene where Mieczyslaw struggles to lift and move a heavy log.

Alfons puts on Mieczyslaw’s socks and then his trousers. It’s a heartbreaking scene of love and devotion, pure in its simplicity but one that many carers of the sick and elderly will know well. There is no drama, there is no voice-over, there is no comment. None is needed. It is perfect.

Mieczyslaw, at 91, can no longer live at home. Alfons, though we do not explicitly see it, cannot take care of him any more. Mieczyslaw is now in a nursing home. A nurse asks him questions, he struggles to answer. What year is it? ‘Is it 2018?’ Mieczyslaw answers.

Alfons sits with him. ‘Do you remember the camels?’ he asks. ‘Oh yes,’ says Mieczyslaw and recites their names. One was called The Pope. The Pope used to sit on the fire and put it out.

The intimate scenes are interspersed with old film footage of when they were young – before they were exiled, then in Siberia, then in Kazakhstan. These are shown but never explained. They are evocative. The purpose of an artist is not to solve or explain mysteries, but rather to reveal them and thus to deepen them. The second layer of film enhances the first, they are completely in synch, both enriching each other with meaning and significance.

Another feature is the stunning photography of the local scenery. These landscapes are just shown, with haunting music; sometimes with the brothers simply observing it, and sometimes with Alfons painting. Long, slow shots, still and pan shots. Only once does the painter, Alfons, comment on what he sees, about the delicacy of a Winter blue on water. Mostly long shots, but there is a stunning close-up of grey dandelion heads in the breeze, ready for the seeds to be blown away, and those dandelions are a perfect metaphor for the two grey old men, ready to move on, too. But not just yet.

Every scene earns its place, like every word in a great poem.

And the music is something else too. It is cello and violin for the most part, some percussion. Lyrical, slow, full of moving airs, several by the great Polish violinist Limpinski and this original elegiac piece by César Lerner gives you a flavour, along with its powerful evocation.

The cinematography is absolutely wonderful. All natural light, but what light. Mid-shot conversations, slow shots of the brothers near windows, a close up of the back of Alfons’ neck, his hair blowing in the breeze as he paints in the countryside.

The combination of the intimate conversations and images of the brothers, the music and the landscape is blissful. Here is a sweet counterpoint of style and substance, the style enhancing the substance, never detracting.

There is a launch, a big exhibition of Alfons’ works in Brussels, with all sorts of Polish and EU dignitaries and we see the brothers go there and Alfons makes a small speech. They are shocked at all the buildings in the city, but at least they can still see the sky. Shortly afterwards the film cuts to a fire – we’re not sure what is happening, then we learn. Their house is on fire, everything is destroyed, including 5,000 of Alfons’ paintings, his life’s work. (We only learn this after the film, from one of the producers).

It is heartbreaking, and Alfons has to hold on to a tree lest he be swept away to the ether, but then they recover and get on with it. It is not discussed. They move on, both men in their 80s and 90s, and look for another home, another beginning. The film closes, there is no further explanation. There is no need.

The real genius in the work is not what’s included, although what we see is stunning. What’s so impressive is all that’s left out. The producer told us that originally it was much longer, telling their full life stories, the exile, the travel, their families, everything. They had filmed the brothers for 8 years, they knew the full story. They had hundreds of hours of film. Then they decided, no: let’s just tell about the now. Just what is, now.

And that’s why it’s such a masterpiece. There is a discipline there, as well as a vision. There is a great rigour as well as soul and humanity and insight.

If you ever, ever, ever get a chance to see it, I implore you to do so. And if you ever see it in DVD or as a download somewhere please let me know, I’d love to see it again.

In a week when we first see how low humanity can go, and then are inspired by the passing of a great artist, we need to continue look for what is good, what is beautiful, what can move and inspire us.

We need to hold on to our humanity tightly, and treasure it, and we need hope.

And Bracia gives us all that. 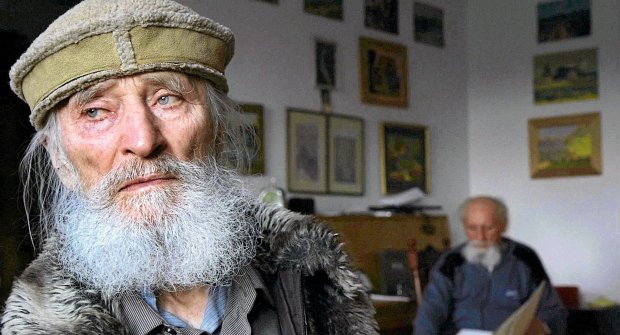